I'm making my way into web development and have seen the word postback thrown around. Coming from a non-web based background, what does a new web developer have to know about postbacks? (i.e. what are they and when do they arise?)

Any more information you'd like to share to help a newbie in the web world be aware of postbacks would be most greatly appreciated.

The following is aimed at beginners to ASP.Net...

When does it happen?

A postback originates from the client browser. Usually one of the controls on the page will be manipulated by the user (a button clicked or dropdown changed, etc), and this control will initiate a postback. The state of this control, plus all other controls on the page,(known as the View State) is Posted Back to the web server.

Most commonly the postback causes the web server to create an instance of the code behind class of the page that initiated the postback. This page object is then executed within the normal page lifecycle with a slight difference (see below). If you do not redirect the user specifically to another page somewhere during the page lifecycle, the final result of the postback will be the same page displayed to the user again, and then another postback could happen, and so on.

Why does it happen?

The web application is running on the web server. In order to process the user’s response, cause the application state to change, or move to a different page, you need to get some code to execute on the web server. The only way to achieve this is to collect up all the information that the user is currently working on and send it all back to the server.

Some things for a beginner to note are...

Do you have code in your Page_Load events? if yes, then perhaps adding the following will help.

This error is thrown when you click on your command and the Page_load is being ran again, in a normal life cycle it would be Page_Load -> Click on Command -> Page_Load (again) -> Process ItemCommand Event

Javascript – Difference between a Postback and a Callback

On the other hand, a callback is also a special kind of postback, but it is just a quick round-trip to the server to get a small set of data (normally), and thus the page is not refreshed, unlike with the postback...think of it as 'calling the server, and receiving some data back'.

With Asp.Net, the ViewState is not refreshed when a callback is invoked, unlike with a postback.

The reason that the whole page is posted with ASP.Net is because ASP.Net encloses the whole page in a <form> with a post method, and so when a submit button is clicked in the page, the form is sent to the server with all of the fields that are in the form... basically the whole page itself.

If you are using FireBug (for Firefox), you can actually see callbacks being invoked to the server in the Console. That way, you will see what specific data is being sent to the server (Request) and also the data the server sent you back (Response).

The below image illustrates the Page Life Cycles of both a postback and a callback in a ASP.NET based Website: 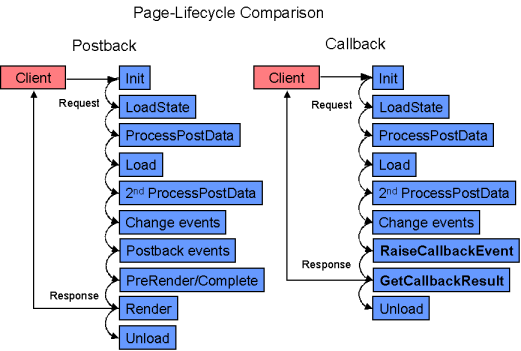