I'm using Chart web helper in ASP.Net MVC 3. I have seen a range of shiny images online showing capabilities of this API, but there is hardly any documentation on how to style the charts. For example, I need to display labels outside of the chart, I'd like to specify percentage, rather than decimal values, etc.

There is a webforms project for download: http://weblogs.asp.net/scottgu/archive/2010/02/07/built-in-charting-controls-vs-2010-and-net-4-series.aspx and very simple class documentation that explains how to assign values and specify basic dimensions.

I understand that no books have been published yet on MVC 3, but surely there should be some sort of documentation explaining how to use the tool?

From what I have read, ASP.Net MVC 3 either took a step back with charting tool by removing ability to style charts, or it has not been documented at all. Came across this article: http://forums.asp.net/t/1620783.aspx/1?ASP+NET+MVC+3+Beta+Chart+Helper+Styling+Please+Help+ , a very similar issue is described there.

EDIT 2:
It appears that Microsoft have partially implemented MSCharts functionality in MVC 3. In order to use MSCharts, the System.Web.DataVisualization assembly must be imported and registered in web.configuration file. T

This way, requests are sent from view to controllers. Controllers generate image of a graph and pass back an image result. Result is then displayed in the view. This is useful as it provides some sort of seperation. I still don't understand why System.WebHelpers.Chart does not already offer this functionality, but hopefully it will be addressed in near future.

EDIT 3:
Few more points to make. Don't construct your graphs in the view – they should be served by a controller. If you do decide to use views for constructing graphs, then make sure you update web.config in Views folder to include <add namespace="System.Web.UI.DataVisualization"/> in the namespace section. Names of assemblies and namespaces are slightly confusing. Assembly is called: System.Web.DataVisualization when namespace is called System.Web.UI.DataVisualization. Finally I think that charting API is great, it serves images which means that charts will be accessible from all web browsers. Quality of the charts is great. I have looked at alternatives such as Fusion Charts, HighCharts and few other jQuery/JavaScript/Flash powered charts. They all try to take £300-£1000 from you without trying to meet the most basic needs of developers.

The chart controls are based off a previously separate project called MS Chart.

The posts seem a bit out of date, but the API is pretty much the same between MS Chart and the new Data Visualization libraries.

To address your example questions:

1) To display labels outside the chart, each Series object has a dictionary array of properties.

2) To specify percentages rather than raw values, the Series object's Label property takes a formatting string.

These custom attributes are available in detail at http://msdn.microsoft.com/en-us/library/dd456764.aspx.

Okay, here's a full code example. I'm using System.Web.DataVisualization v4.0.0.0, so this should be current with MVC 3. The series listed above isn't the actual Chart.Series properties (that's a SeriesCollection). It's the individual series that you're adding to that collection.

When you call up the controller's action, you're presented with the following images. 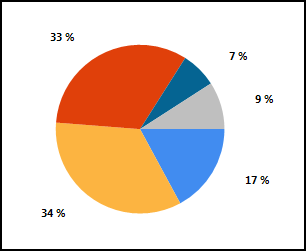 C# – Build does not catch errors in the View in asp.net mvc

The ASPX files in both ASP.NET and ASP.NET MVC are not compiled from the Visual Studio IDE. This is often the cause for "false positives" as you have pointed out.

I often add the aspnet_compiler as a post build action to find those errors. You will add some time to your build process, but in exchange for the wait you should be able to spot these errors more easily.

From the readme word doc for RC1 (not indexed by google)

Note Enabling this feature adds some overhead to the build time.

You can update projects that were created with previous releases of MVC to include build-time validation of views by performing the following steps: