Locked. This question and its answers are locked because the question is off-topic but has historical significance. It is not currently accepting new answers or interactions.

Back in 2003 (when I was 17), I competed in a Battleship AI coding competition. Even though I lost that tournament, I had a lot of fun and learned a lot from it.

Now, I would like to resurrect this competition, in the search of the best battleship AI.

Here is the framework, now hosted on Bitbucket.

The winner will be awarded +450 reputation! The competition will be held starting on the 17th of November, 2009. No entries or edits later than zero-hour on the 17th will be accepted. (Central Standard Time)
Submit your entries early, so you don't miss your opportunity!

To keep this OBJECTIVE, please follow the spirit of the competition.

Rules of the game:

Rules of the competition:

EDIT 1:
Thanks to Freed, who has found an error in the Ship.IsValid function. It has been fixed. Please download the updated version of the framework.

EDIT 2:
Since there has been significant interest in persisting stats to disk and such, I have added a few non-timed set-up and tear-down events that should provide the required functionality. This is a semi-breaking change. That is to say: the interface has been modified to add functions, but no body is required for them. Please download the updated version of the framework.

EDIT 3:
Bug Fix 1: GameWon and GameLost were only getting called in the case of a time out.
Bug Fix 2: If an engine was timing out every game, the competition would never end.
Please download the updated version of the framework. 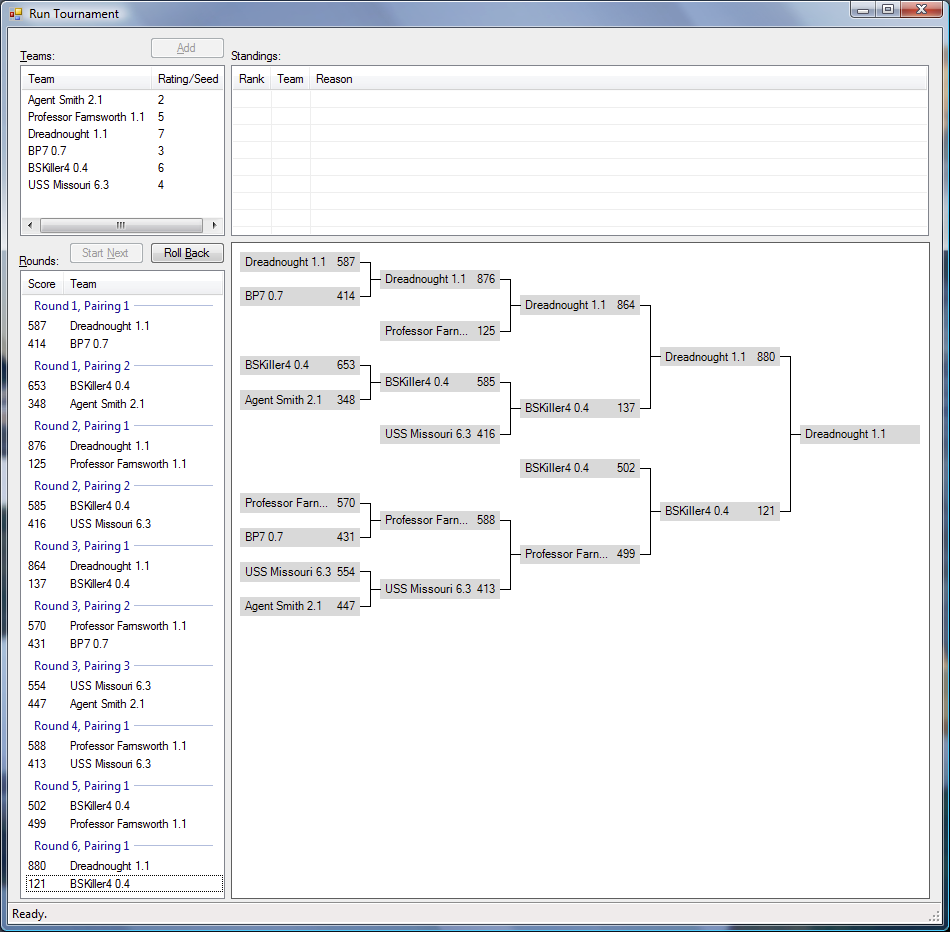 I second the motion to do a lot more games per match. Doing 50 games is just flipping a coin. I needed to do 1000 games to get any reasonable distinction between test algorithms.

C# – the difference between String and string in C#

string is an alias in C# for System.String.
So technically, there is no difference. It's like int vs. System.Int32.

As far as guidelines, it's generally recommended to use string any time you're referring to an object.

Likewise, I think it's generally recommended to use String if you need to refer specifically to the class.

This is the style that Microsoft tends to use in their examples.

It appears that the guidance in this area may have changed, as StyleCop now enforces the use of the C# specific aliases.

In C# 5 and earlier, to give auto implemented properties an initial value, you have to do it in a constructor.

Since C# 6.0, you can specify initial value in-line. The syntax is:

At compile time DefaultValueAttribute will not impact the generated IL and it will not be read to initialize the property to that value (see DefaultValue attribute is not working with my Auto Property).

Example of attributes that impact the IL are ThreadStaticAttribute, CallerMemberNameAttribute, ...