First of all, I want to make myself clear that I do understand that there is no notion of vtables and vptrs in the C++ standard. However I think that virtually all implementations implement the virtual dispatch mechanism in pretty much the same way (correct me if I am wrong, but this isn't the main question). Also, I believe I know how virtual functions work, that is, I can always tell which function will be called, I just need the implementation details.

I would answer like this:
For each class with virtual functions(in this case B and D) we have a separate array of pointers-to-functions called vtable.
The vtable for B would contain

The vtable for D would contain

Now the class B contains a member pointer vptr. D naturally inherits it and therefore contains it too. In the constructor and destructor of B B sets vptr to point to B's vtable. In the constructor and destructor of D D sets it to point to D's vtable.
Any call to a virtual function f on an object x of polymorphic class X is interpreted as a call to x.vptr[f's position in vtables]

The questions are:
1. Do I have any errors in the above description?
2. How does the compiler know f's position in vtable (in detail, please)
3. Does this mean that if a class has two bases then it has two vptrs? What is happening in this case? (try to describe in a similar manner as I did, in as much detail as possible)
4. What's happening in a diamond hierarchy with A on top B,C in the middle and D at the bottom? (A is a virtual base class of B and C)

1. Do I have any errors in the above description?

2. How does the compiler know f's position in vtable

Each vendor will have their own way of doing this, but I always think of the vtable as map of the member function signature to memory offset. So the compiler just maintains this list.

3. Does this mean that if a class has two bases then it has two vptrs? What is happening in this case? 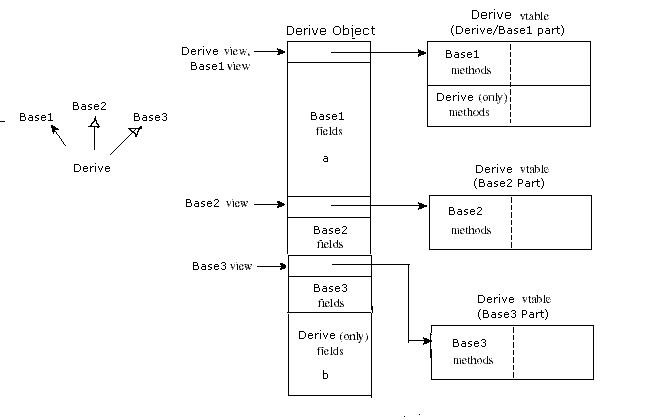 That image is actually for composing the member fields of an object, but vtables can be composed by the compiler in the exact same way (as far as I understand it).

4. What's happening in a diamond hierarchy with A on top B,C in the middle and D at the bottom? (A is a virtual base class of B and C)

The short answer? Absolute hell. Did you virtually inherit both the bases? Just one of them? Neither of them? Ultimately, the same techniques of composing a vtable for the class are used, but how this is done varies way to wildly, since how it should be done is not at all set in stone. There is a decent explanation of solving the diamond-hierarchy problem here, but, like most of this, it is quite vendor-specific.

C++ – How are virtual functions and vtable implemented

How are virtual functions implemented at a deep level?

From "Virtual Functions in C++":

Can the vtable be modified or even directly accessed at runtime?

Universally, I believe the answer is "no". You could do some memory mangling to find the vtable but you still wouldn't know what the function signature looks like to call it. Anything that you would want to achieve with this ability (that the language supports) should be possible without access to the vtable directly or modifying it at runtime. Also note, the C++ language spec does not specify that vtables are required - however that is how most compilers implement virtual functions.

Does the vtable exist for all objects, or only those that have at least one virtual function?

Do abstract classes simply have a NULL for the function pointer of at least one entry?

The answer is it is unspecified by the language spec so it depends on the implementation. Calling the pure virtual function results in undefined behavior if it is not defined (which it usually isn't) (ISO/IEC 14882:2003 10.4-2). In practice it does allocate a slot in the vtable for the function but does not assign an address to it. This leaves the vtable incomplete which requires the derived classes to implement the function and complete the vtable. Some implementations do simply place a NULL pointer in the vtable entry; other implementations place a pointer to a dummy method that does something similar to an assertion.

Note that an abstract class can define an implementation for a pure virtual function, but that function can only be called with a qualified-id syntax (ie., fully specifying the class in the method name, similar to calling a base class method from a derived class). This is done to provide an easy to use default implementation, while still requiring that a derived class provide an override.

Does having a single virtual function slow down the whole class or only the call to the function that is virtual?

This is getting to the edge of my knowledge, so someone please help me out here if I'm wrong!

I believe that only the functions that are virtual in the class experience the time performance hit related to calling a virtual function vs. a non-virtual function. The space overhead for the class is there either way. Note that if there is a vtable, there is only 1 per class, not one per object.

Does the speed get affected if the virtual function is actually overridden or not, or does this have no effect so long as it is virtual?

I don't believe the execution time of a virtual function that is overridden decreases compared to calling the base virtual function. However, there is an additional space overhead for the class associated with defining another vtable for the derived class vs the base class.

C++ – When to use virtual destructors

Virtual destructors are useful when you might potentially delete an instance of a derived class through a pointer to base class:

Here, you'll notice that I didn't declare Base's destructor to be virtual. Now, let's have a look at the following snippet:

Since Base's destructor is not virtual and b is a Base* pointing to a Derived object, delete b has undefined behaviour:

In most implementations, the call to the destructor will be resolved like any non-virtual code, meaning that the destructor of the base class will be called but not the one of the derived class, resulting in a resources leak.

To sum up, always make base classes' destructors virtual when they're meant to be manipulated polymorphically.

You can learn more about virtuality and virtual base class destructor in this article from Herb Sutter.