I'd like to draw a piece of TEdit.Text using Font.Color different from the default. Are there any examples how to do that? 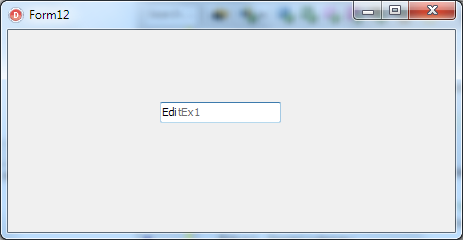 NOTE: what this screenshot pictures is merely a hairy draft, but it convinces me what problem solvable.

Edit controls do not have owner-draw support, but you can custom-draw it by sub-classing it and handling WM_PAINT (among many other messages). It's doable, but it would be a world of pain to actually implement 100% correctly. From the docs: Developing Custom Draw Controls in Visual C++:

Note that owner-draw will work for most controls. However, it doesn't work for edit controls; and with regards to the list control, it works only for report-view style

I was also interested to find out how deep the rabbit hole goes, so,
Here is a code sample using an interposer class (still needs to implement selection but the custom drawing works when the caret is in the control):

Delphi can’t get text from TEdit

The problem is that Edit7 is a part of the TForm1 class. Edit7 is not accessible by name outside of TForm1. So either you can use the global Form1 variable, and do

or you can make the secondFunction part of the TForm1 class:

But then you need to declare secondFunction in the declaration of the TForm1 class, like

in the beginning of the unit.

Your settings in the .dfm file will be scaled up correctly, so long as Scaled is True.

If you are setting dimensions in code then you need to scale them by Screen.PixelsPerInch divided by Form.PixelsPerInch. Use MulDiv to do this.

This is what the form persistence framework does when Scaled is True.

In fact, you can make a cogent argument for replacing this function with a version that hard codes a value of 96 for the denominator. This allows you to use absolute dimension values and not worry about the meaning changing if you happen to change font scaling on your development machine and re-save the .dfm file. The reason that matters is that the PixelsPerInch property stored in the .dfm file is the value of the machine on which the .dfm file was last saved.

So, continuing the theme, another thing to be wary of is that if your project is developed on multiple machines with different DPI values, you will find that the scaling that Delphi uses when saving .dfm files results in controls wandering over a series of edits. At my place of work, to avoid this, we have a strict policy that forms are only ever edited at 96dpi (100% scaling).

In fact my version of ScaleFromSmallFontsDimension also makes allowance for the possibility of the form font differing at runtime from that set at designtime. On XP machines my application's forms use 8pt Tahoma. On Vista and up 9pt Segoe UI is used. This provides yet another degree of freedom. The scaling must account for this because the absolute dimension values used in the source code are assumed to be relative to the baseline of 8pt Tahoma at 96dpi.

If you use any images or glyphs in your UI then these need to scale too. A common example would be the glyphs that are used on toolbars and menus. You'll want to provide these glyphs as icon resources linked to your executable. Each icon should contain a range of sizes and then at runtime you choose the most appropriate size and load it into an image list. Some details on that topic can be found here: How do I load icons from a resource without suffering from aliasing?

Another useful trick is to define dimensions in relative units, relative to TextWidth or TextHeight. So, if you want something to be around 10 vertical lines in size you can use 10*Canvas.TextHeight('Ag'). This is a very rough and ready metric because it doesn't allow for line spacing and so on. However, often all you need to do is be able to arrange that the GUI scales correctly with PixelsPerInch.

You should also mark your application as being high DPI aware. The best way to do this is through the application manifest. Since Delphi's build tools don't allow you to customise the manifest you use this forces you to link your own manifest resource.

where Manifest.txt contains the actual manifest. You would also need to include the comctl32 v6 section and set requestedExecutionLevel to asInvoker. You then link this compiled resource to your app and make sure that Delphi doesn't try to do the same with its manifest. In modern Delphi you achieve that by setting the Runtime Themes project option to None.

The manifest is the right way to declare your app to be high DPI aware. If you just want to try it out quickly without messing with your manifest, call SetProcessDPIAware. Do so as the very first thing you do when your app runs. Preferably in one of the early unit initialization sections, or as the first thing in your .dpr file.

If you don't declare your app to be high DPI aware then Vista and up will render it in a legacy mode for any font scaling above 125%. This looks quite dreadful. Try to avoid falling into that trap.

As of Windows 8.1, there is now OS support for per-monitor DPI settings (http://msdn.microsoft.com/en-ca/magazine/dn574798.aspx). This is a big issue for modern devices which might have different displays attached with very different capabilities. You might have a very high DPI laptop screen, and a low DPI external projector. Supporting such a scenario takes even more work than described above.