How to receive emails using indy 10 and delphi 7 with the file attachment?

This is working Indy 10 code. 'Files' is a stringlist which holds a list of attachments which have been downloaded - I'm interested in the attachments, not the letters themselves.

I have posted the complete set of demos for SOAP on CodeCentral as item 28789.

These contain every single one of the Delphi 2007 era SOAP demos from the WebServices folder, now updated for Delphi XE and XE2, including converting the old WAD servers into new INDY VCL servers. You'd think that was impressive, except it's not. It's really easy. Just use the wizard to create a new project, and then add the web service interface and implementation units, and any other units that belong in the old demo, to the project. Once they're added to the project, they just work. Basic demo SOAP Servers are really easy to build in Delphi, once you have a working demo, you'll find it's pretty easy to modify and extend it.

The demo that best answers the question I asked above is in the SOAPDataModule sub-folder.

The basic problems with the demo from the 2007 era are two: 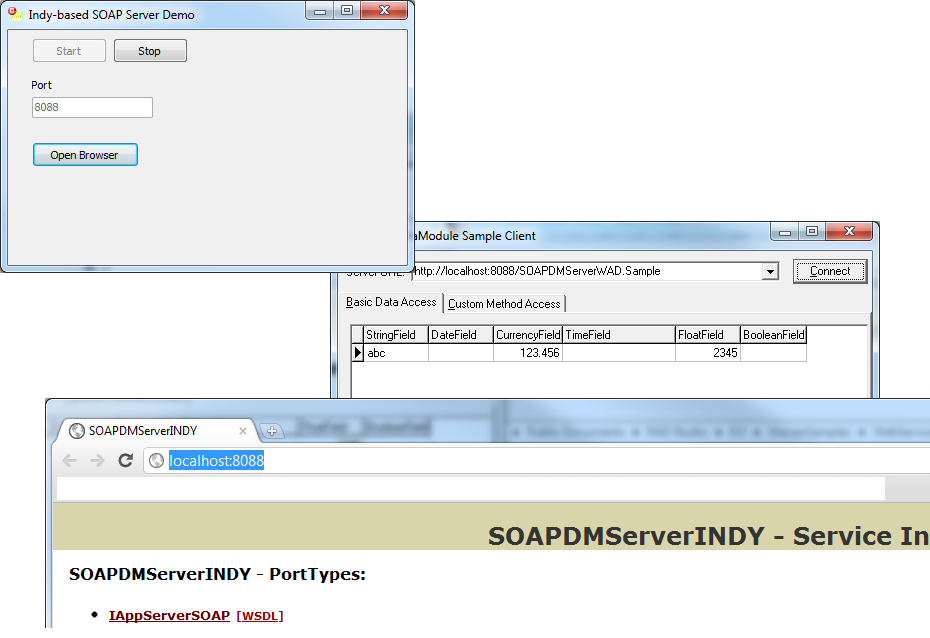 The elements of this demo are a server (SoapDMServerINDY, based on the code from SOAPDMServerWAD), and the client SOAPDMClient which connects to the demo and has two pages, one page will show basic data access via a DBGrid + dataset remoting, and the second page shows how to invoke a custom SOAP method.

To use the demo: You have to start the server, click the start button, then start the client and click Connect.