We have a project set up with maven for resolving dependancies. It usually works fine, but now I am trying to compile and run it on a new PC and I have problem with missing dependencies in Eclipse.

What is funny is that if I run "mvn package" in console or in eclipse, it works fine and even produces war containing all necessary jars. Only Eclipse complains with "The project was not built since its build path is incomplete. Cannot find the class file for org.slf4j.Logger…". If I compare the project with some other computer (where project works fine), I notice that there are quite a few libraries missing under "Maven dependencies" listing in Eclipse. Eventhough they are in the packaged war and they can be found also under repository folder.

So, the jar-s are there just Eclipse won't list them all under "Maven dependencies". What can I do?

Computer is running on Windows 7 with 64bit java & eclipse.

Well, I tried everything posted here, unfortunately nothings works in my case. So, trying different combinations I came out with this one that solved my problem.

1) Open the .classpath file at the root of your eclipse's project.

2) Insert the following entry to the file:

Then, rebuild your project at eclipse (Project->Clean-Build). You now can check at the Java Build Path of you project at the Libraries tab the Maven Dependencies included: 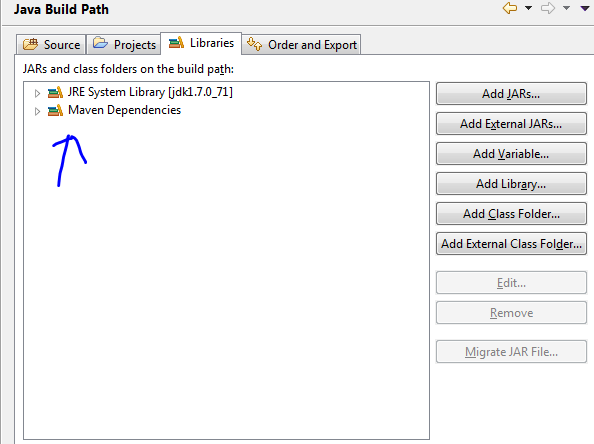 Eclipse – How to you speed up Eclipse

The three most influential factors for Eclipse speed are:

The "same" workspace in Indigo (3.7.2) SR2 loads in 4 seconds, in Kepler SR2 (4.3.2) in 7 seconds and in Luna (4.4.0) in 10 seconds. All are Java EE bundles. Newer versions have more bundled plugins, but still the trend is obvious. (by "same" workspace I mean: same (additionally installed) plugins used, same projects checked out from version control).

The Xmx argument is the amount of memory Eclipse will get (in simple terms). With -Xmx4g, it gets 4 GB of RAM, etc.

From version 4.8 (Photon) an up there was a steady speed gain after each version.
The main platform was optimized every release to load faster, enable more features for the dark theme and to add more features for newer Java versions for the Java development tools.
Especially with-in the last 3 versions the startup time was increased a lot. There should be a significant increase in start-up time with the newest version of Eclipse 2020-12.

In my experience it started a lot faster with each new version.
But: There are still plug-ins which do not follow the new way of using the Eclipse API and are therefore still slow to start.
Since the change to Java 11 as the minimum runtime version starting from Eclipse version 2020-09 at least the core system uses the newer features of the JVM. It is up to the providers of the other plug-ins to upgrade to newer APIs and to use the full power of modern CPUs (e.g. concurrent programming model).

Java – How to create an executable JAR with dependencies using Maven

and you run it with

Compile goal should be added before assembly:single or otherwise the code on your own project is not included.

Commonly this goal is tied to a build phase to execute automatically. This ensures the JAR is built when executing mvn install or performing a deployment/release.