I've been stuck trying to figure out what to do with this, but basically I want a way to print out the value in column B given a specific value that matches column A. So for example:

I want to, after using find/findnext or whatever it is, to print out this string:

And I have a loop to loop through as many time as it needs to get all the rows taken care of. But with find it keeps returning me the same first string ("ABC") and the string ends up being ABC ABC instead of ABC JKL

I tried using FindNext instead of find, but what I got is a 1004 Error. So I'm not really sure where I'm doing this wrong. Anyone has any idea?

You don't need FindNext if you start each Find after the previous one: 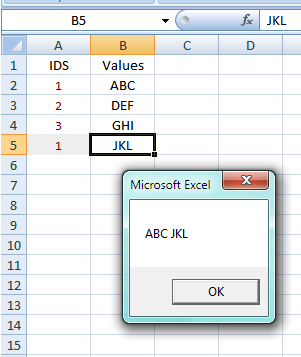