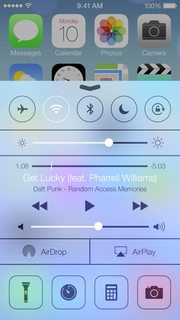 This question suggests applying a CI filter to the contents below, but that's a whole different approach. It's obvious that iOS 7 doesn't capture the contents of the views below, for many reasons:

Can anyone hypothesize what frameworks they could be using to create this effect, and if it's possible to create a similar effect with current public APIs?

Edit: (from comment) We don't exactly know how Apple is doing it, but are there any basic assumptions we can make? We can assume they are using hardware, right?

Is the effect self-contained in each view, such that the effect doesn't actually know what's behind it? Or must, based on how blurs work, the contents behind the blur be taken into consideration?

Why bother replicating the effect? Just draw a UIToolbar behind your view.

Ios – How to disable the UITableView selection

All you have to do is set the selection style on the UITableViewCell instance using either:

Further, make sure you either don't implement -tableView:didSelectRowAtIndexPath: in your table view delegate or explicitly exclude the cells you want to have no action if you do implement it.