I have designed my custom Cell in IB, subclassed it and connected my outlets to my custom class. I have three subviews in cell content which are: UIView (cdView) and two labels (titleLabel and emailLabel). Depending on data available for each row, sometimes I want to have UIView and two labels displayed in my cell and sometimes only two labels. What I am trying to do is to set constraints that way if I set UIView property to hidden or I will remove it from superview the two labels will move to the left. I tried to set UIView leading constraint to Superview (Cell content) for 10px and UILabels leading Constraints for 10 px to the next view (UIView). Later in my code

I am hiding my cell.cdView and I would like the labels to move to the left however they are staying in the same position in Cell. I tried to remove cell.cdView from superview but it didn't work either. I have attached image to clarify what I am about. 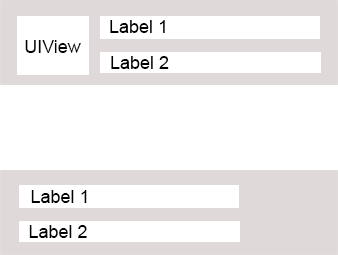 I know how to do this programatically and I am not looking for that solution. What I want is to set constraints in IB and I expect that my subviews will move dynamically if other views are removed or hidden. Is it possible to do this in IB with auto-layout?

It is possible, but you'll have to do a little extra work. There are a couple conceptual things to get out of the way first:

In your case, this likely means:

What you need to do is judiciously over-constrain your labels. Leave your existing constraints (10pts space to the other view) alone, but add another constraint: make your labels' left edges 10pts away from their superview's left edge with a non-required priority (the default high priority will probably work well).

Then, when you want them to move left, remove the left view altogether. The mandatory 10pt constraint to the left view will disappear along with the view it relates to, and you'll be left with just a high-priority constraint that the labels be 10pts away from their superview. On the next layout pass, this should cause them to expand left until they fill the width of the superview but for your spacing around the edges.

One important caveat: if you ever want your left view back in the picture, not only do you have to add it back into the view hierarchy, but you also have to reestablish all its constraints at the same time. This means you need a way to put your 10pt spacing constraint between the view and its labels back whenever that view is shown again.

Here is some sample code:

Ios – In a storyboard, how to make a custom cell for use with multiple controllers

As I understand it, you want to:

A storyboard is, in essence, not much more than a collection of .xib files. When you load up a table view controller that has some prototype cells out of a storyboard, here's what happens:

The important thing to note here is there is a distinction between the class of the cell and the visual appearance of the cell. You could create two separate prototype cells of the same class, but with their subviews laid out completely differently. In fact, if you use the default UITableViewCell styles, this is exactly what's happening. The "Default" style and the "Subtitle" style, for example, are both represented by the same UITableViewCell class.

This is important: The class of the cell does not have a one-to-one correlation with a particular view hierarchy. The view hierarchy is determined entirely by what's in the prototype cell that was registered with this particular controller.

Given this information, let's look at what happened in your above attempts.

This is expected. While both cells had the same class, the view hierarchy that was passed to the cell in Controller #2 was entirely devoid of subviews. So you got an empty cell, which is exactly what you put in the prototype.

Designed each cell type in a different NIB and wired up to the appropriate cell class. In storyboard, added an empty prototype cell and set its class and reuse id to refer to my cell class. In controllers' viewDidLoad methods, registered those NIB files for the reuse id. When shown, cells in both controllers were empty like the prototype.

Again, this is expected. The reuse identifier is not shared between storyboard scenes or nibs, so the fact that all of these distinct cells had the same reuse identifier was meaningless. The cell you get back from the tableview will have an appearance that matches the prototype cell in that scene of the storyboard.

This solution was close, though. As you noted, you could just programmatically call -[UITableView registerNib:forCellReuseIdentifier:], passing the UINib containing the cell, and you'd get back that same cell. (This isn't because the prototype was "overriding" the nib; you simply hadn't registered the nib with the tableview, so it was still looking at the nib embedded in the storyboard.) Unfortunately, there's a flaw with this approach — there's no way to hook up storyboard segues to a cell in a standalone nib.

Kept prototypes in both controllers empty and set class and reuse id to my cell class. Constructed the cells' UI entirely in code. Cells work perfectly in all controllers.

Naturally. Hopefully, this is unsurprising.

So, that's why it didn't work. You can design your cells in standalone nibs and use them in multiple storyboard scenes; you just can't currently hook up storyboard segues to those cells. Hopefully, though, you've learned something in the process of reading this.