I'm cloning a project from a git repo, but when I execute pod install the first line I see is "Setting up CocoaPods Master repo" and after that I can't see anything more, the console stops there.

I don't know what is happening. Anyone knows what's happening here? Why Does CocoaPods stop there?

You could try running in verbose mode:

That'll show you what cocoa pods are up to:

How do you create a new project/repository?

A git repository is simply a directory containing a special .git directory.

This is different from "centralised" version-control systems (like subversion), where a "repository" is hosted on a remote server, which you checkout into a "working copy" directory. With git, your working copy is the repository.

Simply run git init in the directory which contains the files you wish to track.

This creates a .git (hidden) folder in the current directory.

To make a new project, run git init with an additional argument (the name of the directory to be created):

You could also list the .git directory, and check it contains files/directories similar to the following:

If for whatever reason you wish to "de-git" a repository (you wish to stop using git to track that project). Simply remove the .git directory at the base level of the repository.

Caution: This will destroy all revision history, all your tags, everything git has done. It will not touch the "current" files (the files you can currently see), but previous changes, deleted files and so on will be unrecoverable!

Git – Why does git perform fast-forward merges by default

Warning: Non-fast-forwarding has potential side effects as well. Please review https://sandofsky.com/blog/git-workflow.html, avoid the 'no-ff' with its "checkpoint commits" that break bisect or blame, and carefully consider whether it should be your default approach for master. 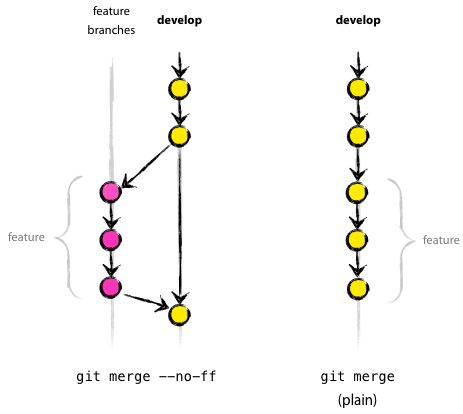 Incorporating a finished feature on develop

Finished features may be merged into the develop branch to add them to the upcoming release:

The --no-ff flag causes the merge to always create a new commit object, even if the merge could be performed with a fast-forward. This avoids losing information about the historical existence of a feature branch and groups together all commits that together added the feature.

By default, Git does not create an extra merge commit when merging a commit that is a descendant of the current commit. Instead, the tip of the current branch is fast-forwarded.
When set to false, this variable tells Git to create an extra merge commit in such a case (equivalent to giving the --no-ff option from the command line).
When set to 'only', only such fast-forward merges are allowed (equivalent to giving the --ff-only option from the command line).

The fast-forward is the default because:

But if you anticipate an iterative workflow on one topic/feature branch (i.e., I merge, then I go back to this feature branch and add some more commits), then it is useful to include only the merge in the main branch, rather than all the intermediate commits of the feature branch.

In this case, you can end up setting this kind of config file:

The OP adds in the comments:

I think the lifetime of branches varies greatly from user to user. Among experienced users, though, there's probably a tendency to have far more short-lived branches.

To me, a short-lived branch is one that I create in order to make a certain operation easier (rebasing, likely, or quick patching and testing), and then immediately delete once I'm done.
That means it likely should be absorbed into the topic branch it forked from, and the topic branch will be merged as one branch. No one needs to know what I did internally in order to create the series of commits implementing that given feature.

it really depends on your development workflow:

See "When should you branch?"

Actually, when you consider the Mercurial branch model, it is at its core one branch per repository (even though you can create anonymous heads, bookmarks and even named branches)
See "Git and Mercurial - Compare and Contrast".

Mercurial, by default, uses anonymous lightweight codelines, which in its terminology are called "heads".
Git uses lightweight named branches, with injective mapping to map names of branches in remote repository to names of remote-tracking branches.
Git "forces" you to name branches (well, with the exception of a single unnamed branch, which is a situation called a "detached HEAD"), but I think this works better with branch-heavy workflows such as topic branch workflow, meaning multiple branches in a single repository paradigm.