I am developing exclusively for iOS 5 using ARC. Should IBOutlets to UIViews (and subclasses) be strong or weak?

Would get rid of all of this:

Are there any problems doing this? The templates are using strong as are the automatically generated properties created when connecting directly to the header from the 'Interface Builder' editor, but why? The UIViewController already has a strong reference to its view which retains its subviews.

WARNING, OUTDATED ANSWER: this answer is not up to date as per WWDC 2015, for the correct answer refer to the accepted answer (Daniel Hall) above. This answer will stay for record.

Summarized from the developer library:

From a practical perspective, in iOS and OS X outlets should be defined as declared properties. Outlets should generally be weak, except for those from File’s Owner to top-level objects in a nib file (or, in iOS, a storyboard scene) which should be strong. Outlets that you create will therefore typically be weak by default, because:

It is possible to disable ARC for individual files by adding the -fno-objc-arc compiler flag for those files.

You add compiler flags in Targets -> Build Phases -> Compile Sources. You have to double click on the right column of the row under Compiler Flags. You can also add it to multiple files by holding the cmd button to select the files and then pressing enter to bring up the flag edit box. (Note that editing multiple files will overwrite any flags that it may already have.)

I created a sample project that has an example: https://github.com/jaminguy/NoArc 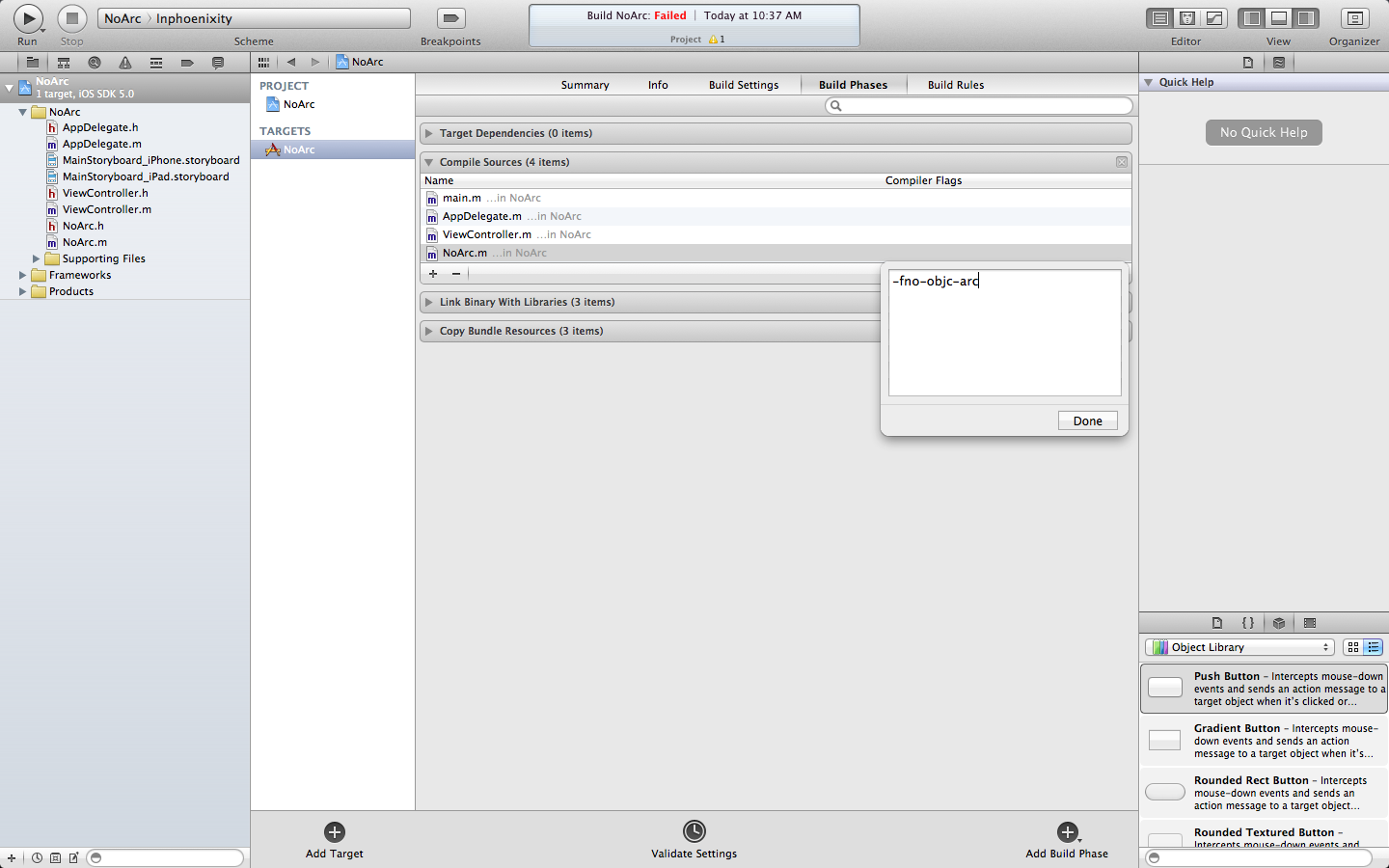 See this answer for more info: Disable Automatic Reference Counting for Some Files

Ios – Objective-C ARC: strong vs retain and weak vs assign

After reading so many articles Stackoverflow posts and demo applications to check variable property attributes, I decided to put all the attributes information together:

Below is the detailed article link where you can find above mentioned all attributes, that will definitely help you. Many thanks to all the people who give best answers here!!

Imagine our object is a dog, and that the dog wants to run away (be deallocated).

Weak pointers, on the other hand, are like little kids pointing at the dog and saying "Look! A dog!" As long as the dog is still on the leash, the little kids can still see the dog, and they'll still point to it. As soon as all the leashes are detached, though, the dog runs away no matter how many little kids are pointing to it.

As soon as the last strong pointer (leash) no longer points to an object, the object will be deallocated, and all weak pointers will be zeroed out.

When we use weak?