Fellow devs,
I am having trouble with AutoLayout in Interface Builder (Xcode 5 / iOS 7).
It's very basic and important so I think everyone should know how this properly works. If this is a bug in Xcode, it is a critical one!

So, whenever I have a view hierarchy such as this I run into trouble:

The UIScrollView has solid constraints, e.g., 50 px from every side (no problem).
Then I add a Top Space constraint to the UILabel (no problem) (and I can even pin height / width of the label, changes nothing, but should be unneccessary due to the Label's intrinsic size)

The trouble starts when I add a trailing constraint to the UILabel:

Now two warnings occur – and I don't understand why:

I did this minimal example in a freshly new project which you can download and I attached a screenshot. As you can see, Interface Builder expects the Label to sit outside of the UIScrollView's boundary (the orange dashed rectangle). Updating the Label's frame with the Resolve Issues Tool moves it right there.

Please note: If you replace the UIScrollView with a UIView, the behaviour is as expected (the Label's frame is correct and according to the constraint). So there seems to either be an issue with UIScrollView or I am missing out on something important.

Help me Obi-Wan Kenobi! Why the ambiguous layout? Why the misplaced view?

You can download the sample project here and try if you can figure out what's going on:
https://github.com/Wirsing84/AutoLayoutProblem 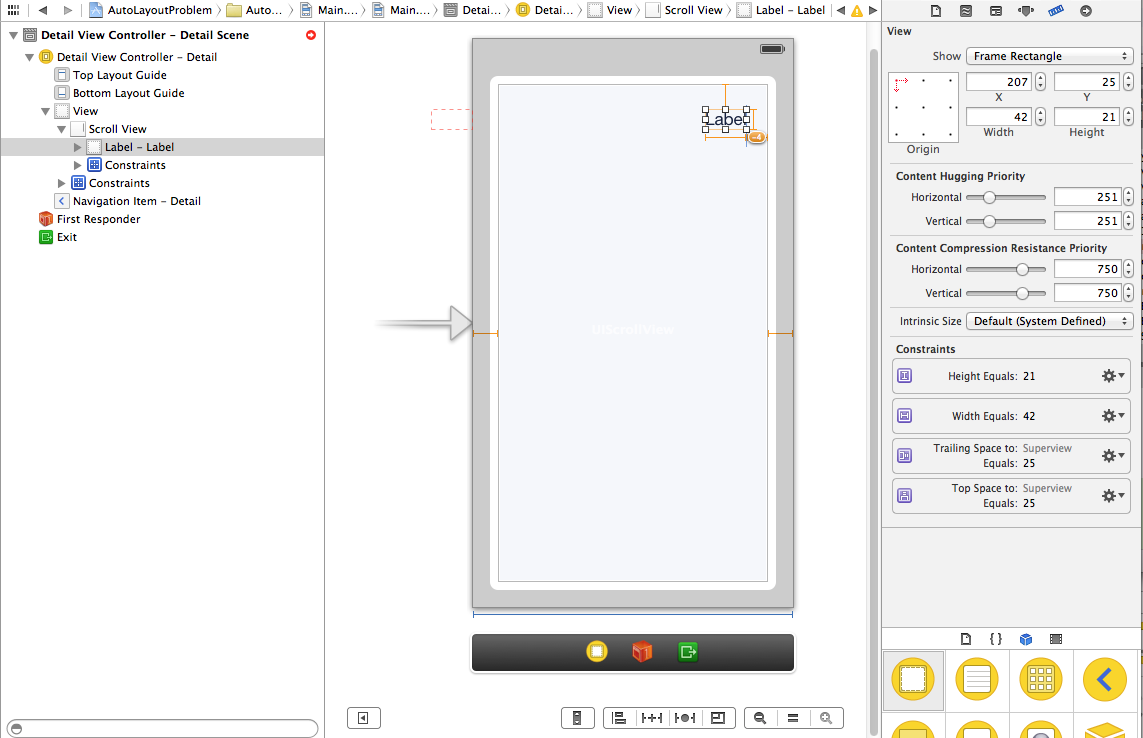 So I just sorted out in this way:

Now you can add all your views in that contentView, and the contentSize of the scrollView will be automatically resized according with the contentView.

Some special case is covered by this video posted by @Sergio in the comments below.

Ios – How to use Autolayout to set constraints on the UIScrollview

It's hard to see the exact values and setup of your constraints as you've pasted them here, so I'm not sure from looking at your screenshots where you have gone wrong.

In lieu of an explanation of what's wrong in your setup, I've created a basic sample project with a very similar view hierarchy and constraint setup to the one you describe. The horizontal scrolling works as expected in the sample project, which uses the "Pure AutoLayout" approach that Apple describes in the Technical Note.

I also had a lot of trouble originally getting Auto Layout to work with UIScrollView. The key to getting it to work is making sure that all of the items in the scroll view, taken together, have constraints that eventually link to all sides of the scroll view and that contribute to the AutoLayout system being able to determine a contentSize for the scroll view that will be bigger than its frame. It looks like you were trying to do that in your code, but maybe you had some superfluous constraints in there that were making the contentSize too small.

I also found this ebook chapter to be very helpful in making me understand how all this works. Hope all this helps.

You're not describing scale-to-fit; you're describing aspect-fit. (I have edited your question in this regard.) The subview becomes as large as possible while maintaining its aspect ratio and fitting entirely inside its parent.

Anyway, you can do this with auto layout. You can do it entirely in IB as of Xcode 5.1. Let's start with some views: 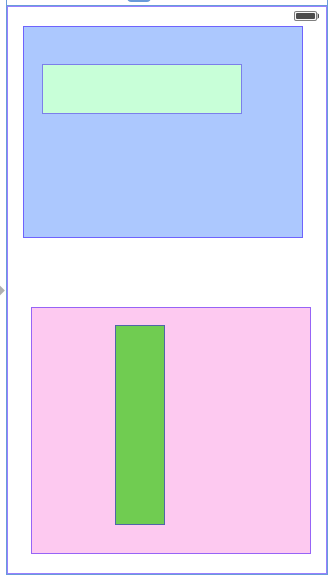 First, I'll create constraints on all four sides of the blue view. I'll pin it to its nearest neighbor on each edge, with a distance of 0. I make sure to turn off margins:

Note that I don't update the frame yet. I find it easier to leave room between the views when setting up constraints, and just set the constants to 0 (or whatever) by hand.

Next, I pin the left, bottom, and right edges of the pink view to its nearest neighbor. I don't need to set up a top edge constraint because its top edge is already constrained to the bottom edge of the blue view.

I also need an equal-heights constraint between the pink and blue views. This will make them each fill half the screen:

If I tell Xcode to update all the frames now, I get this: 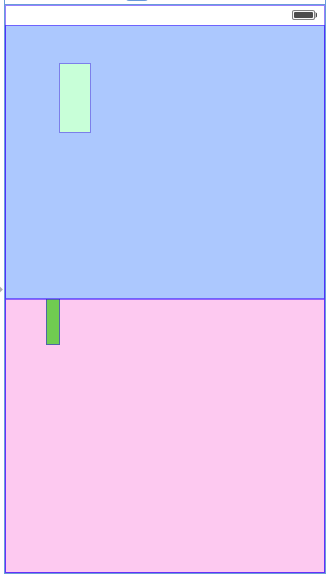 So the constraints I've set up so far are correct. I undo that and start work on the light green view.

The same thing happens with the height constraint. And since the aspect-ratio constraint is also required, it can only maximize the size of the subview along one axis (unless the container happens to have the same aspect ratio as the subview).

So first I create the aspect ratio constraint:

Then I create equal width and height constraints with the container:

I need to edit these constraints to be less-than-or-equal constraints:

Next I need to create another set of equal width and height constraints with the container:

And I need to make these new constraints less than required priority:

Finally, you asked for the subview to be centered in its container, so I'll set up those constraints:

Now, to test, I'll select the view controller and ask Xcode to update all the frames. This is what I get: 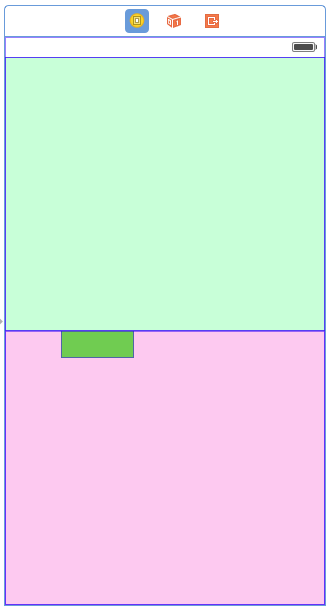 Oops! The subview has expanded to completely fill its container. If I select it, I can see that in fact it's maintained its aspect ratio, but it's doing an aspect-fill instead of an aspect-fit. 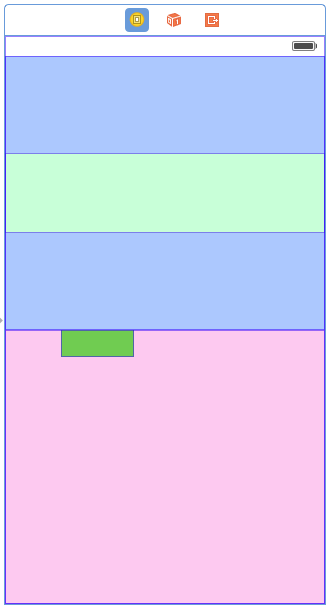 Now I do all the same things to the dark green view on the bottom. I need to make sure its aspect ratio is 1:4 (Xcode resized it in a weird way since it didn't have constraints). I won't show the steps again since they're the same. Here's the result: 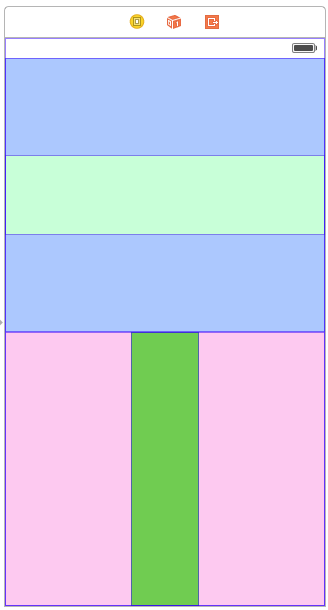 Now I can run it in the iPhone 4S simulator, which has a different screen size than IB used, and test rotation:

And I can test in in the iPhone 6 simulator:

I've uploaded my final storyboard to this gist for your convenience.