I recently moved from Eclipse to IntelliJ IDEA, and there is a feature that I'm missing. In Eclipse, when you placed the caret on a checked exception, in throws declaration or catch block, it would highlight which method/constructor calls throw that exception.

Is there any way to do this in IntelliJ IDEA (Community edition)?

Place the caret on the catch keyword and press Ctrl+Shift+F7.

(Find | Highlight Usages in File). If you are using different keymap and the above shortcut doesn't work, use Help | Find Action to search for this action and see its keyboard shortcut:

If you want it to work automatically, enable Settings | Editor | Highlight usages of element at caret.

The same works on try and throws keywords with a choice of exceptions to highlight.

Here is a screenshot from IntelliJ IDEA Tip of the Day: 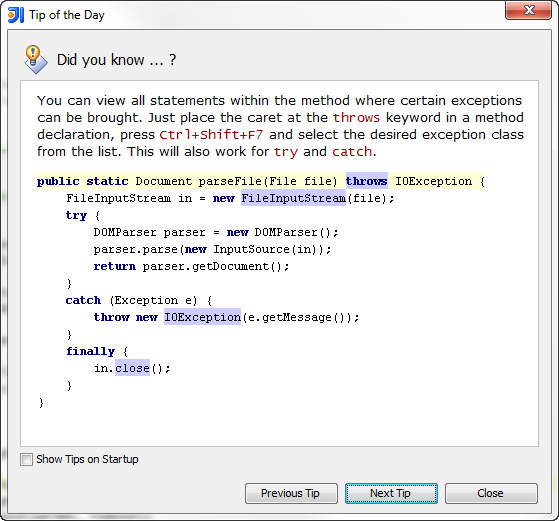 Note that there is no way to highlight it by particular exception class until you select this class from the list of suggestions:

Intellij-idea – How to permanently enable line numbers in IntelliJ

From version 14.0 onwards, the path to the setting dialog is slightly different, a General submenu has been added between Editor and Appearance as shown below 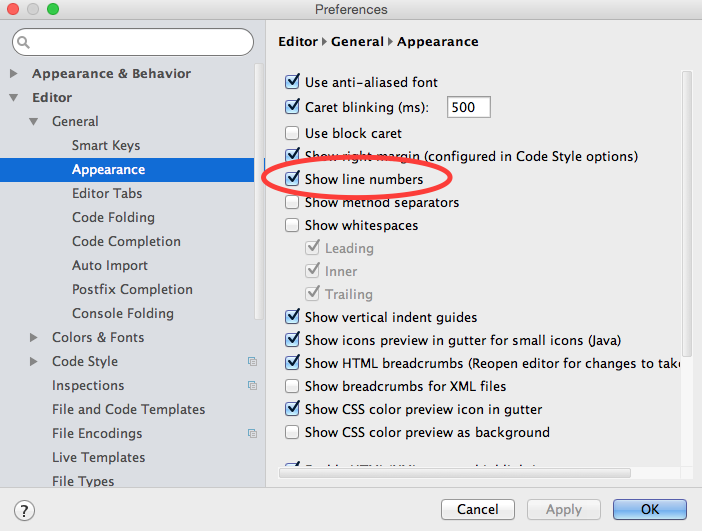 From IntelliJ 8.1.2 onwards, this option is in File | Settings1. Within the IDE Settings section of that dialog, you'll find it under Editor | Appearance. 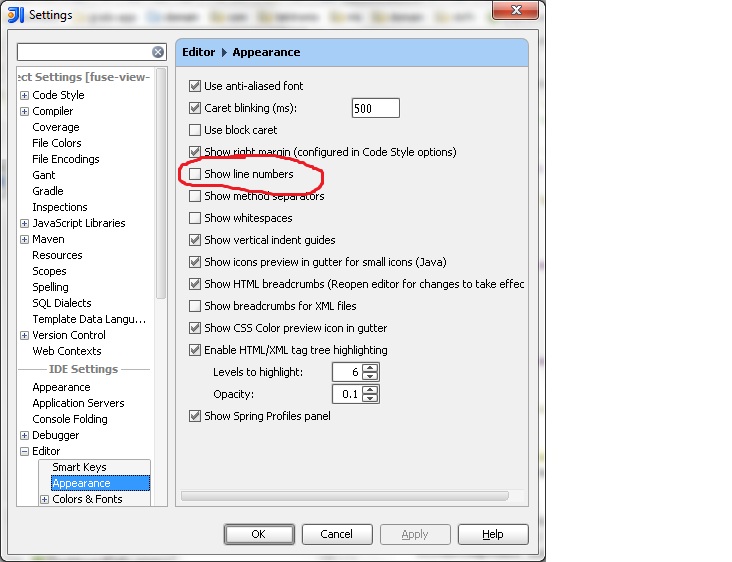 Java – The case against checked exceptions

I think I read the same Bruce Eckel interview that you did - and it's always bugged me. In fact, the argument was made by the interviewee (if this is indeed the post you're talking about) Anders Hejlsberg, the MS genius behind .NET and C#.

Fan though I am of Hejlsberg and his work, this argument has always struck me as bogus. It basically boils down to:

"Checked exceptions are bad because programmers just abuse them by always catching them and dismissing them which leads to problems being hidden and ignored that would otherwise be presented to the user".

By "otherwise presented to the user" I mean if you use a runtime exception the lazy programmer will just ignore it (versus catching it with an empty catch block) and the user will see it.

The summary of the argument is that "Programmers won't use them properly and not using them properly is worse than not having them".

There is some truth to this argument and in fact, I suspect Goslings motivation for not putting operator overrides in Java comes from a similar argument - they confuse the programmer because they are often abused.

But in the end, I find it a bogus argument of Hejlsberg's and possibly a post-hoc one created to explain the lack rather than a well thought out decision.

I would argue that while the over-use of checked exceptions is a bad thing and tends to lead to sloppy handling by users, but the proper use of them allows the API programmer to give great benefit to the API client programmer.

For me, the classic example is the file-open API. Every programming language in the history of languages (on file systems at least) has an API somewhere that lets you open a file. And every client programmer using this API knows that they have to deal with the case that the file they are trying to open doesn't exist. Let me rephrase that: Every client programmer using this API should know that they have to deal with this case. And there's the rub: can the API programmer help them know they should deal with it through commenting alone or can they indeed insist the client deal with it.

where fopen indicates failure by returning 0 and C (foolishly) lets you treat 0 as a boolean and... Basically, you learn this idiom and you're okay. But what if you're a noob and you didn't learn the idiom. Then, of course, you start out with

and learn the hard way.

That clearly defined protocol is typically defined by a method signature. Here fopen requires that you pass it a string (or a char* in the case of C). If you give it something else you get a compile-time error. You didn't follow the protocol - you're not using the API properly.

In some (obscure) languages the return type is part of the protocol too. If you try to call the equivalent of fopen() in some languages without assigning it to a variable you'll also get a compile-time error (you can only do that with void functions).

The point I'm trying to make is that: In a statically typed language the API programmer encourages the client to use the API properly by preventing their client code from compiling if it makes any obvious mistakes.

(In a dynamically typed language, like Ruby, you can pass anything, say a float, as the file name - and it will compile. Why hassle the user with checked exceptions if you're not even going to control the method arguments. The arguments made here apply to statically-typed languages only.)

So, what about checked exceptions?

Well here's one of the Java APIs you can use for opening a file.

See that catch? Here's the signature for that API method:

Note that FileNotFoundException is a checked exception.

The API programmer is saying this to you: "You may use this constructor to create a new FileInputStream but you

And that's the whole point as far as I'm concerned.

I think the file-open illustrates the point nicely. The API programmer knows you might give them a file name that turns out to be nonexistent at the time the API is called, and that they won't be able to return you what you wanted, but will have to throw an exception. They also know that this will happen pretty regularly and that the client programmer might expect the file name to be correct at the time they wrote the call, but it might be wrong at runtime for reasons beyond their control too.

So the API makes it explicit: There will be cases where this file doesn't exist at the time you call me and you had damn well better deal with it.

This would be clearer with a counter-case. Imagine I'm writing a table API. I have the table model somewhere with an API including this method:

Now as an API programmer I know there will be cases where some client passes in a negative value for the row or a row value outside of the table. So I might be tempted to throw a checked exception and force the client to deal with it:

(I wouldn't really call it "Checked" of course.)

This is bad use of checked exceptions. The client code is going to be full of calls to fetch row data, every one of which is going to have to use a try/catch, and for what? Are they going to report to the user that the wrong row was sought? Probably not - because whatever the UI surrounding my table view is, it shouldn't let the user get into a state where an illegal row is being requested. So it's a bug on the part of the client programmer.

The API programmer can still predict that the client will code such bugs and should handle it with a runtime exception like an IllegalArgumentException.

With a checked exception in getRowData, this is clearly a case that's going to lead to Hejlsberg's lazy programmer simply adding empty catches. When that happens, the illegal row values will not be obvious even to the tester or the client developer debugging, rather they'll lead to knock-on errors that are hard to pinpoint the source of. Arianne rockets will blow up after launch.

Okay, so here's the problem: I'm saying that the checked exception FileNotFoundException is not just a good thing but an essential tool in the API programmers toolbox for defining the API in the most useful way for the client programmer. But the CheckedInvalidRowNumberException is a big inconvenience, leading to bad programming and should be avoided. But how to tell the difference.

I guess it's not an exact science and I guess that underlies and perhaps justifies to a certain extent Hejlsberg's argument. But I'm not happy throwing the baby out with the bathwater here, so allow me to extract some rules here to distinguish good checked exceptions from bad:

and it will be painful to have to wrap in try/catch every time.

So those are my rules. Somewhat contrived, and there will doubtless be exceptions (please help me refine them if you will). But my main argument is that there are cases like FileNotFoundException where the checked exception is as important and useful a part of the API contract as the parameter types. So we should not dispense with it just because it is misused.

Sorry, didn't mean to make this so long and waffly. Let me finish with two suggestions:

B: Client programmers: get in the habit of creating a wrapped exception (google it) early on in your development. JDK 1.4 and later provide a constructor in RuntimeException for this, but you can easily create your own too. Here's the constructor:

Then get in the habit of whenever you have to handle a checked exception and you're feeling lazy (or you think the API programmer was overzealous in using the checked exception in the first place), don't just swallow the exception, wrap it and rethrow it.

Put this in one of your IDE's little code templates and use it when you're feeling lazy. This way if you really need to handle the checked exception you'll be forced to come back and deal with it after seeing the problem at runtime. Because, believe me (and Anders Hejlsberg), you're never going to come back to that TODO in your