I'd like to display a simple animation by calling imshow in a for loop. Here's a demo of my problem:

Note that I generate the images before running the loop, and that the only parts I time are the imshow and draw functions. I'm getting results that look like this: 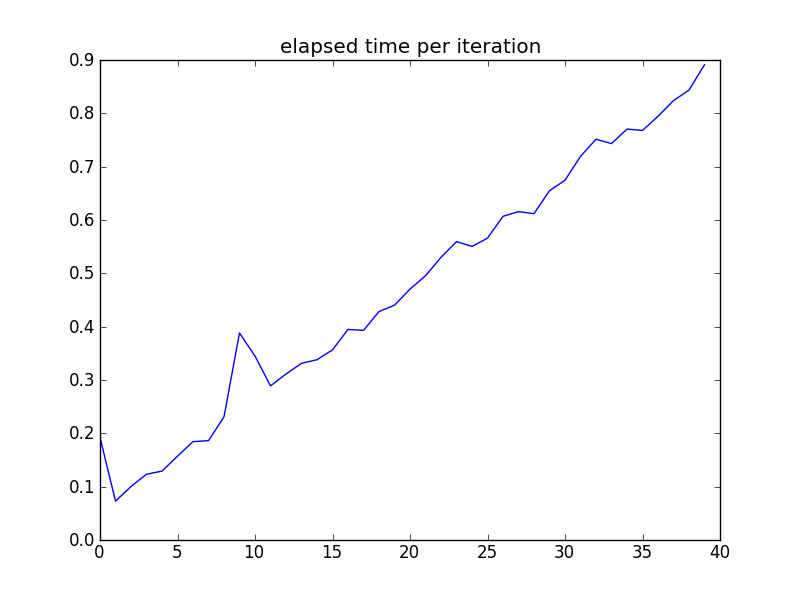 How can I avoid this slowdown?

Things are slowing down because you're adding more and more images and drawing them all each time.

Either 1) clear the plot between each image (In your case, pylab.cla()), or better yet 2) don't make a new image, just set the data of the existing image to the new data.

As an example of using cla():

And as an example of just setting the data:

You'll notice that the second method is considerably faster.

is is identity testing, == is equality testing. what happens in your code would be emulated in the interpreter like this:

so, no wonder they're not the same, right?

Python – How does Python’s super() work with multiple inheritance

This is detailed with a reasonable amount of detail by Guido himself in his blog post Method Resolution Order (including two earlier attempts).

In your example, Third() will call First.__init__. Python looks for each attribute in the class's parents as they are listed left to right. In this case, we are looking for __init__. So, if you define

Python will start by looking at First, and, if First doesn't have the attribute, then it will look at Second.

This situation becomes more complex when inheritance starts crossing paths (for example if First inherited from Second). Read the link above for more details, but, in a nutshell, Python will try to maintain the order in which each class appears on the inheritance list, starting with the child class itself.

So, for instance, if you had:

the MRO would be [Fourth, Second, Third, First].

By the way: if Python cannot find a coherent method resolution order, it'll raise an exception, instead of falling back to behavior which might surprise the user.

Example of an ambiguous MRO:

Should Third's MRO be [First, Second] or [Second, First]? There's no obvious expectation, and Python will raise an error:

Why do the examples above lack super() calls? The point of the examples is to show how the MRO is constructed. They are not intended to print "first\nsecond\third" or whatever. You can – and should, of course, play around with the example, add super() calls, see what happens, and gain a deeper understanding of Python's inheritance model. But my goal here is to keep it simple and show how the MRO is built. And it is built as I explained: