When using the pipe operator %>% with packages such as dplyr, ggvis, dycharts, etc, how do I do a step conditionally? For example;

These approaches don't seem to work:

There is a long way:

Is there a better way without all the redundancy?

Here is a quick example that takes advantage of the . and ifelse:

In the ifelse, if Y is TRUE if will add 1, otherwise it will just return the last value of X. The . is a stand-in which tells the function where the output from the previous step of the chain goes, so I can use it on both branches.

Edit As @BenBolker pointed out, you might not want ifelse, so here is an if version.

Thanks to @Frank for pointing out that I should use { braces around my if and ifelse statements to continue the chain.

R – Getting LaTeX into R Plots 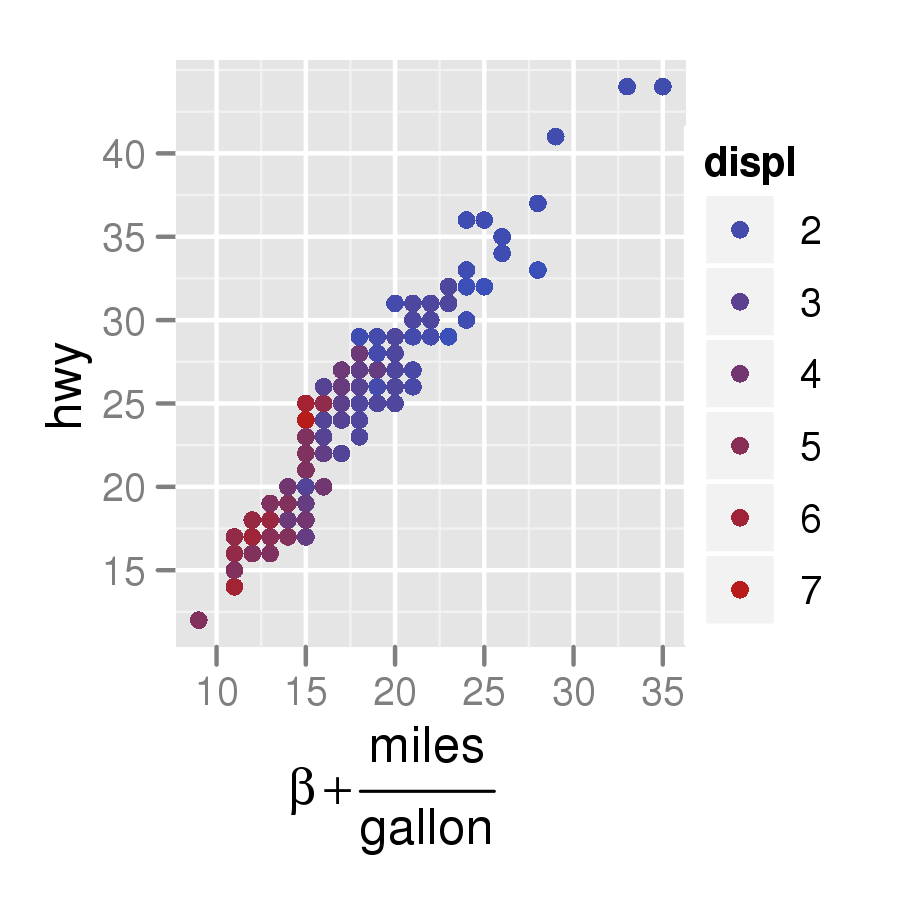 R – data.table vs dplyr: can one do something well the other can’t or does poorly

We need to cover at least these aspects to provide a comprehensive answer/comparison (in no particular order of importance): Speed, Memory usage, Syntax and Features.

My intent is to cover each one of these as clearly as possible from data.table perspective.

Note: unless explicitly mentioned otherwise, by referring to dplyr, we refer to dplyr's data.frame interface whose internals are in C++ using Rcpp.

The data.table syntax is consistent in its form - DT[i, j, by]. To keep i, j and by together is by design. By keeping related operations together, it allows to easily optimise operations for speed and more importantly memory usage, and also provide some powerful features, all while maintaining the consistency in syntax.

Quite a few benchmarks (though mostly on grouping operations) have been added to the question already showing data.table gets faster than dplyr as the number of groups and/or rows to group by increase, including benchmarks by Matt on grouping from 10 million to 2 billion rows (100GB in RAM) on 100 - 10 million groups and varying grouping columns, which also compares pandas. See also updated benchmarks, which include Spark and pydatatable as well.

On benchmarks, it would be great to cover these remaining aspects as well:

To summarise, it is important to realise that every bit of optimisation matters. As Grace Hopper would say, Mind your nanoseconds!

Data tables are extremely fast but I think their concision makes it harder to learn and code that uses it is harder to read after you have written it ...

I find this remark pointless because it is very subjective. What we can perhaps try is to contrast consistency in syntax. We will compare data.table and dplyr syntax side-by-side.

We will work with the dummy data shown below:

Once again, the syntax is consistent with DT[i, j, by] with additional arguments allowing for controlling the output further.

Once again, data.table's syntax is consistent with DT[i, j, by]. We can just keep throwing expressions in j without having to worry about these things.

Have a look at this SO question and this one. I wonder if it would be possible to express the answer as straightforward using dplyr's syntax...

To summarise, I have particularly highlighted several instances where dplyr's syntax is either inefficient, limited or fails to make operations straightforward. This is particularly because data.table gets quite a bit of backlash about "harder to read/learn" syntax (like the one pasted/linked above). Most posts that cover dplyr talk about most straightforward operations. And that is great. But it is important to realise its syntax and feature limitations as well, and I am yet to see a post on it.

data.table has its quirks as well (some of which I have pointed out that we are attempting to fix). We are also attempting to improve data.table's joins as I have highlighted here.

But one should also consider the number of features that dplyr lacks in comparison to data.table.

I have pointed out most of the features here and also in this post. In addition: