Closed. This question does not meet Stack Overflow guidelines. It is not currently accepting answers.

Want to improve this question? Update the question so it's on-topic for Stack Overflow.

I like to keep my websites extremely light and fast, but of course I need some kind of user tracking and analytics.

It seems like Google Analytics always takes significant enough processing time that I'd like to replace it with something faster (and/or hosted locally), perhaps having less features.

I really only care about these metrics: browser, OS, referrer, and # hits per page on a given day or week.

Does anyone have any good suggestions, or is Google Analytics really the best option?

You should try Asynchronous Google Analytics. It loads GA in the background, so the rest of the content on the page is not blocked from rendering:

Additionally, since you first asked this question, Google has upgraded their serving infrastructure. It's now faster, and much more reliable than it was in 2008. For most sites, it's better to use Google's CDN instead of hosting ga.js yourself. Since the official ga.js is on so many sites, most users will have it in their browser cache.

Upon further analysis of this, I believe this is (at least partially) caused by the data alignment of the four-pointers. This will cause some level of cache bank/way conflicts.

If I've guessed correctly on how you are allocating your arrays, they are likely to be aligned to the page line.

This means that all your accesses in each loop will fall on the same cache way. However, Intel processors have had 8-way L1 cache associativity for a while. But in reality, the performance isn't completely uniform. Accessing 4-ways is still slower than say 2-ways.

EDIT: It does in fact look like you are allocating all the arrays separately. Usually when such large allocations are requested, the allocator will request fresh pages from the OS. Therefore, there is a high chance that large allocations will appear at the same offset from a page-boundary.

As @Stephen Cannon points out in the comments, there is a very likely possibility that this alignment causes false aliasing in the load/store units or the cache. I Googled around for this and found that Intel actually has a hardware counter for partial address aliasing stalls:

This one is easy. The dataset is so small that the performance is dominated by overhead like looping and branching.

Here, as the data sizes increase, the amount of relative overhead goes down and the performance "saturates". Here two loops is slower because it has twice as much loop and branching overhead.

I'm not sure exactly what's going on here... Alignment could still play an effect as Agner Fog mentions cache bank conflicts. (That link is about Sandy Bridge, but the idea should still be applicable to Core 2.)

At this point, the data no longer fits in the L1 cache. So performance is capped by the L1 <-> L2 cache bandwidth.

The performance drop in the single-loop is what we are observing. And as mentioned, this is due to the alignment which (most likely) causes false aliasing stalls in the processor load/store units.

However, in order for false aliasing to occur, there must be a large enough stride between the datasets. This is why you don't see this in region 3.

At this point, nothing fits in the cache. So you're bound by memory bandwidth. 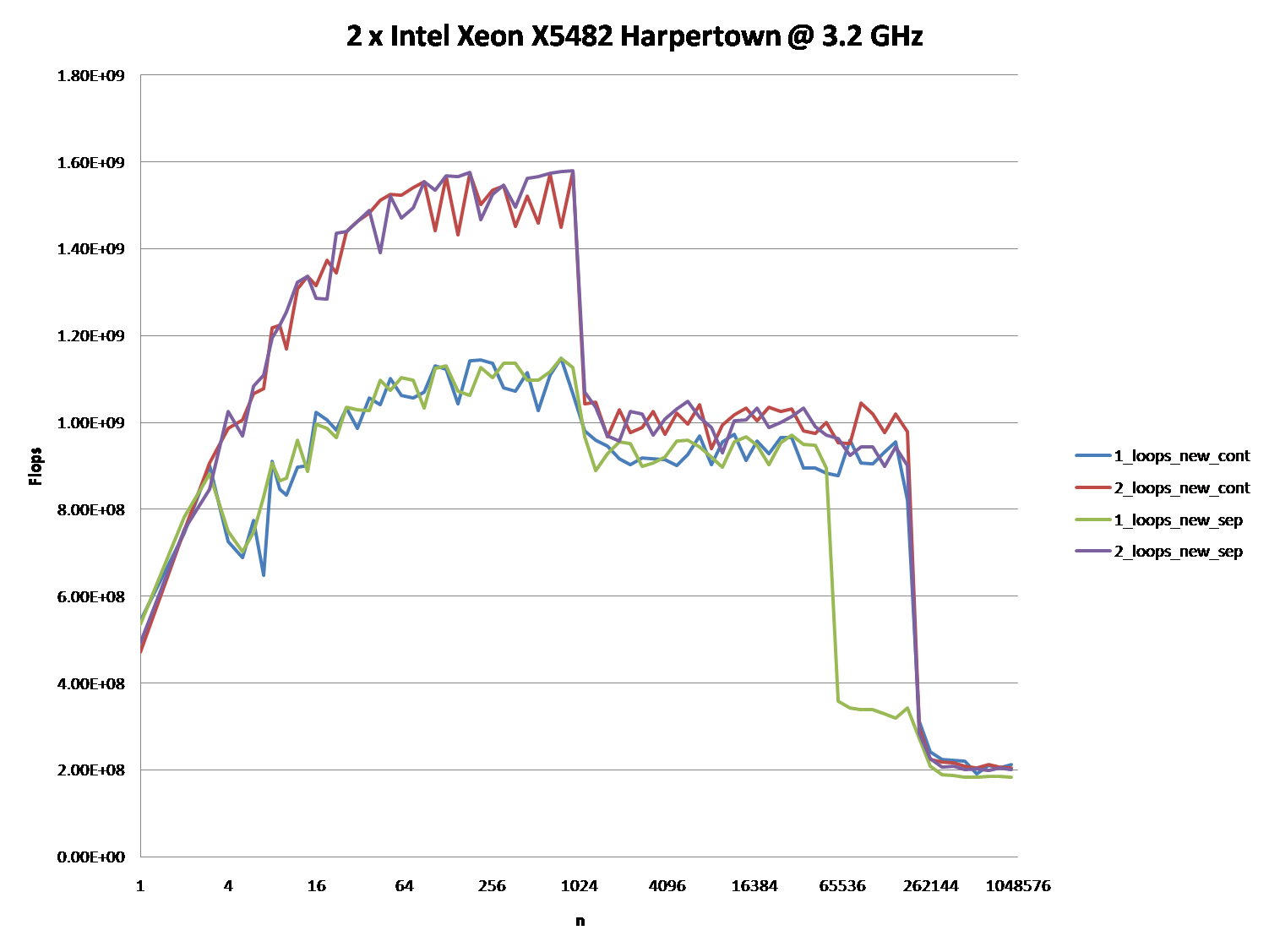 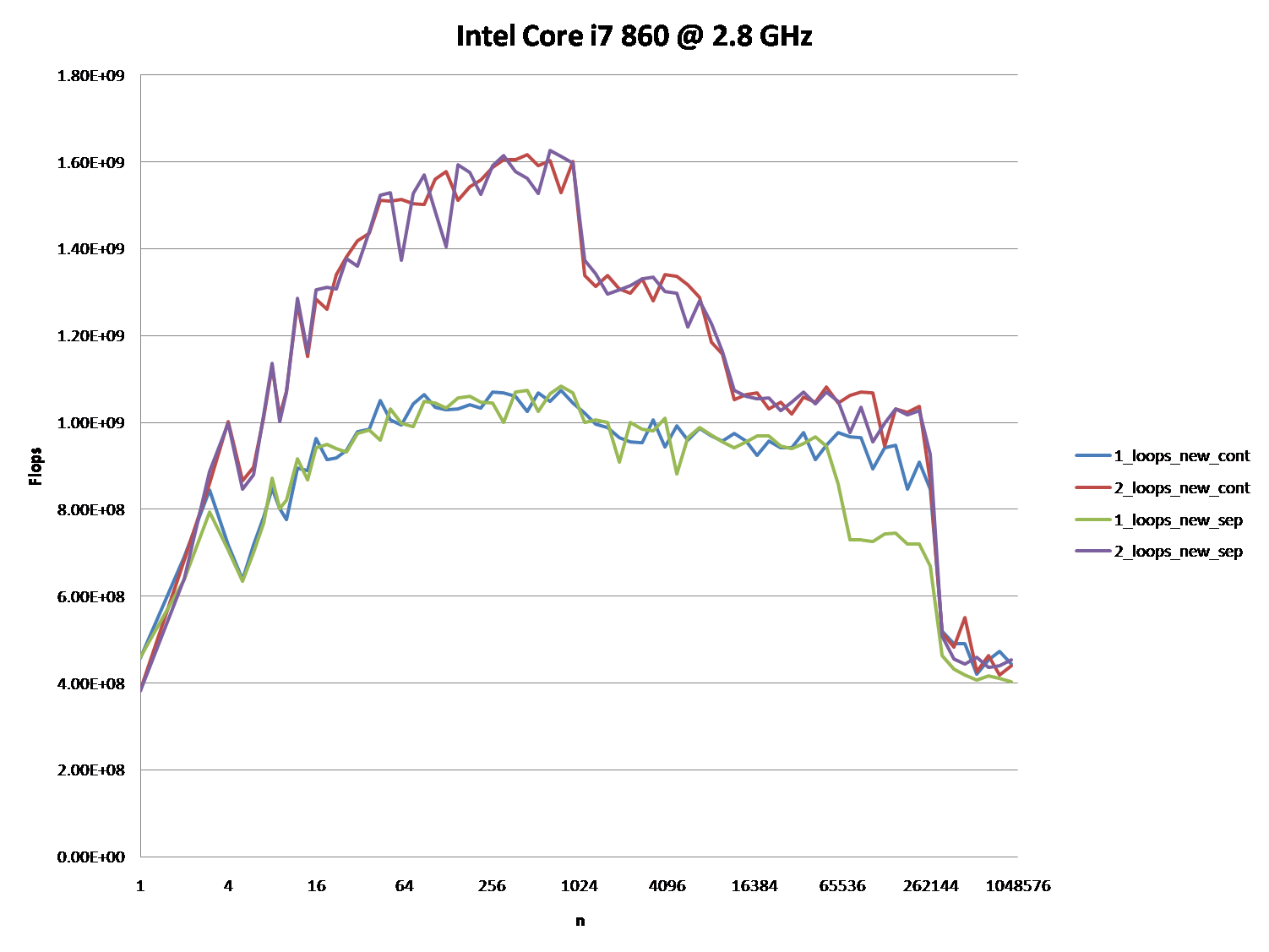 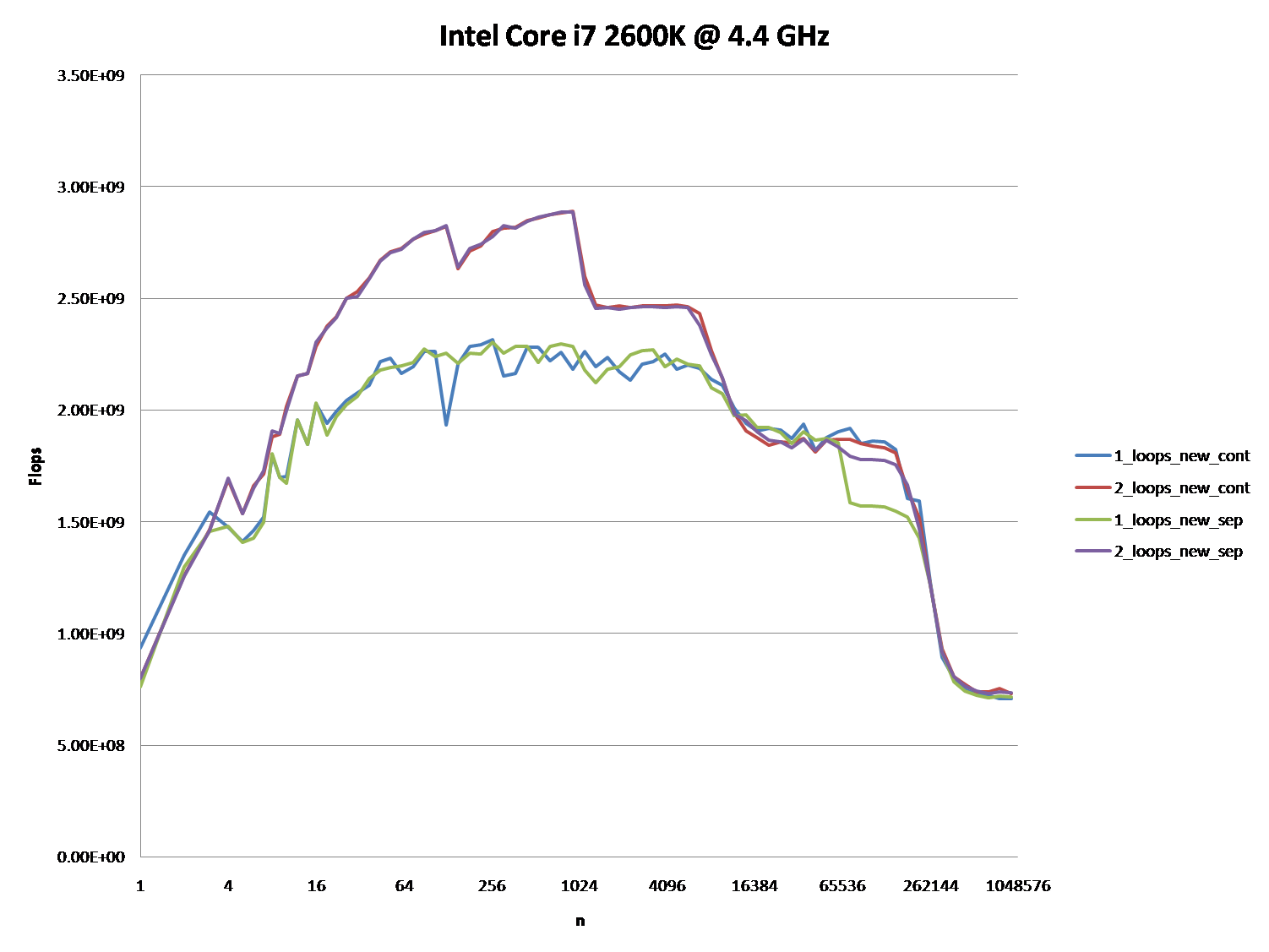 You are a victim of branch prediction fail.

What is Branch Prediction? 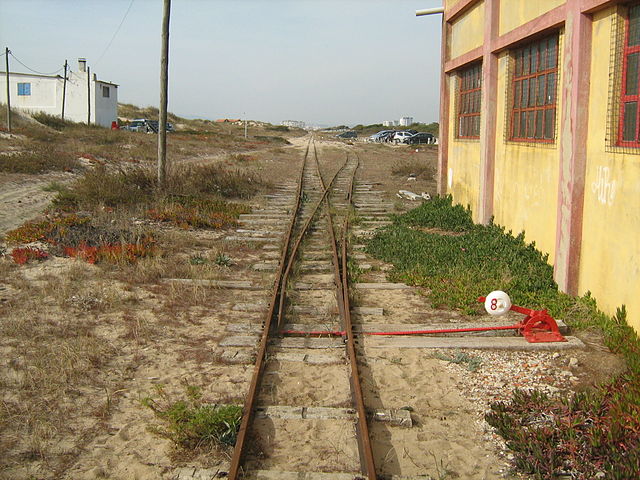 Image by Mecanismo, via Wikimedia Commons. Used under the CC-By-SA 3.0 license.

Now for the sake of argument, suppose this is back in the 1800s - before long-distance or radio communication.

You are the operator of a junction and you hear a train coming. You have no idea which way it is supposed to go. You stop the train to ask the driver which direction they want. And then you set the switch appropriately.

Trains are heavy and have a lot of inertia, so they take forever to start up and slow down.

Is there a better way? You guess which direction the train will go!

Consider an if-statement: At the processor level, it is a branch instruction:

You are a processor and you see a branch. You have no idea which way it will go. What do you do? You halt execution and wait until the previous instructions are complete. Then you continue down the correct path.

Modern processors are complicated and have long pipelines. This means they take forever to "warm up" and "slow down".

Is there a better way? You guess which direction the branch will go!

If you guess right every time, the execution will never have to stop.
If you guess wrong too often, you spend a lot of time stalling, rolling back, and restarting.

This is branch prediction. I admit it's not the best analogy since the train could just signal the direction with a flag. But in computers, the processor doesn't know which direction a branch will go until the last moment.

How would you strategically guess to minimize the number of times that the train must back up and go down the other path? You look at the past history! If the train goes left 99% of the time, then you guess left. If it alternates, then you alternate your guesses. If it goes one way every three times, you guess the same...

In other words, you try to identify a pattern and follow it. This is more or less how branch predictors work.

Most applications have well-behaved branches. Therefore, modern branch predictors will typically achieve >90% hit rates. But when faced with unpredictable branches with no recognizable patterns, branch predictors are virtually useless.

As hinted from above, the culprit is this if-statement:

This is very friendly to the branch predictor since the branch consecutively goes the same direction many times. Even a simple saturating counter will correctly predict the branch except for the few iterations after it switches direction.

However, when the data is completely random, the branch predictor is rendered useless, because it can't predict random data. Thus there will probably be around 50% misprediction (no better than random guessing).

What can be done?

If the compiler isn't able to optimize the branch into a conditional move, you can try some hacks if you are willing to sacrifice readability for performance.

This eliminates the branch and replaces it with some bitwise operations.

(Note that this hack is not strictly equivalent to the original if-statement. But in this case, it's valid for all the input values of data[].)

A general rule of thumb is to avoid data-dependent branching in critical loops (such as in this example).

This goes to show that even mature modern compilers can vary wildly in their ability to optimize code...