I am working with an SVN repository with many projects. I need to move a few of the projects out of that repository into individual repositories, one for each project, keeping the history.

I've been able to use svnadmin dump to dump the entire repository and svnadmin load it into another repository, but I can't find a way of dumping only one project from the original repository so I can load it into the new one. Is this possible? If so how?

You can use the svndumpfilter utility to do this. The SVN book has a good explanation of how to do this.

For instance, one way would be:

How to move a file

Check out section 5.14.2. Moving files and folders (or check out "move" in the Index of the help) of the TortoiseSVN help. You do a move via right-dragging. It also mentions that you need to commit from the parent folder to make it "one" revision. This works for doing the change in a working copy.

(Note that the SVN items in the following image will only show up if the destination folder has already been added to the repository.) 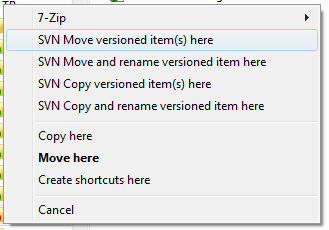 You can also do the move via the Repo Browser (section 5.23. The Repository Browser of the help).

You can use this one-liner to build a template from your existing SVN repository:

SVN will stop if it finds a missing SVN user, not in the file. But after that, you can update the file and pick up where you left off.

Now pull the SVN data from the repository:

This command will create a new Git repository in dest_dir-tmp and start pulling the SVN repository. Note that the "--stdlayout" flag implies you have the common "trunk/, branches/, tags/" SVN layout. If your layout differs, become familiar with --tags, --branches, --trunk options (in general git svn help).

All common protocols are allowed: svn://, http://, https://. The URL should target the base repository, something like http://svn.mycompany.com/myrepo/repository. The URL string must not include /trunk, /tag or /branches.

Note that after executing this command it very often looks like the operation is "hanging/frozen", and it's quite normal that it can be stuck for a long time after initializing the new repository. Eventually, you will then see log messages which indicate that it's migrating.

Also note that if you omit the --no-metadata flag, Git will append information about the corresponding SVN revision to the commit message (i.e. git-svn-id: svn://svn.mycompany.com/myrepo/<branchname/trunk>@<RevisionNumber> <Repository UUID>)

If a user name is not found, update your users.txt file then:

You might have to repeat that last command several times, if you have a large project until all of the Subversion commits have been fetched:

When completed, Git will checkout the SVN trunk into a new branch. Any other branches are set up as remotes. You can view the other SVN branches with:

If you want to keep other remote branches in your repository, you want to create a local branch for each one manually. (Skip trunk/master.) If you don't do this, the branches won't get cloned in the final step.

Tags are imported as branches. You have to create a local branch, make a tag and delete the branch to have them as tags in Git. To do it with tag "v1":

Clone your GIT-SVN repository into a clean Git repository:

The local branches that you created earlier from remote branches will only have been copied as remote branches into the newly cloned repository. (Skip trunk/master.) For each branch you want to keep:

Finally, remove the remote from your clean Git repository that points to the now-deleted temporary repository: