I'm using Team Foundation Server 2008 (SP 1) and I need to move multiple files from one folder to another (to retain file history). In addition to Team Explorer (with SP 1) I've also got the latest TFS Power Tools (October 2008) installed (for Windows Shell integration).

Now, the problem is that I can't seem to select and move multiple files via either the shell or the Source Control Explorer window. I can move individual files (by right clicking + "Move") and I can move whole folders (same operation) but when I select multiple files (in a folder) the "Move" context item is grayed/disabled.

Does anyone know if this is possible.. and if not.. why not!?

Can anyone suggest a workaround which isn't overly complicated? 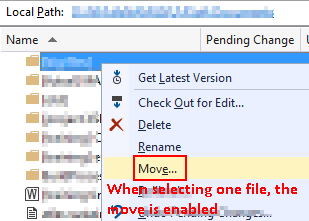 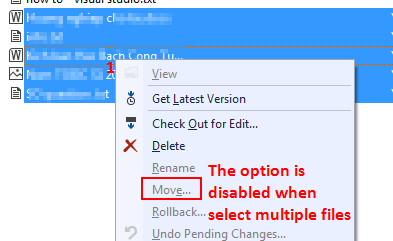 Use the tf.exe tool from the Visual studio commandline - it can handle wildcards:

[EDIT] As noted in the comments: move is an alias for rename. Both commands move history.

Visual-studio – Should I add the Visual Studio .suo and .user files to source control

These files contain user preference configurations that are in general specific to your machine, so it's better not to put it in SCM. Also, VS will change it almost every time you execute it, so it will always be marked by the SCM as 'changed'. I don't include either, I'm in a project using VS for 2 years and had no problems doing that. The only minor annoyance is that the debug parameters (execution path, deployment target, etc.) are stored in one of those files (don't know which), so if you have a standard for them you won't be able to 'publish' it via SCM for other developers to have the entire development environment 'ready to use'.

NOTE: This answer changes SHA1s, so take care when using it on a branch that has already been pushed. If you only want to fix the spelling of a name or update an old email, git lets you do this without rewriting history using .mailmap. See my other answer.

Then mark all of your bad commits as "edit" in the rebase file. If you also want to change your first commit, you have to manually add it as the first line in the rebase file (follow the format of the other lines). Then, when git asks you to amend each commit, do

edit or just close the editor that opens, and then do

to continue the rebase.

You could skip opening the editor altogether here by appending --no-edit so that the command will be:

As some of the commenters have noted, if you just want to change the most recent commit, the rebase command is not necessary. Just do

There was a slight flaw in my original response. If there are any merge commits between the current HEAD and your <some HEAD before all your bad commits>, then git rebase will flatten them (and by the way, if you use GitHub pull requests, there are going to be a ton of merge commits in your history). This can very often lead to a very different history (as duplicate changes may be "rebased out"), and in the worst case, it can lead to git rebase asking you to resolve difficult merge conflicts (which were likely already resolved in the merge commits). The solution is to use the -p flag to git rebase, which will preserve the merge structure of your history. The manpage for git rebase warns that using -p and -i can lead to issues, but in the BUGS section it says "Editing commits and rewording their commit messages should work fine."

I've added -p to the above command. For the case where you're just changing the most recent commit, this is not an issue.

Use --rebase-merges instead of -p (-p is deprecated and has serious issues).