Which Eclipse files is it appropriate to put under source control, aside from the sources obviously?

In my project, specifically, I'm wondering about:

If there are any of these for which it depends, please explain your guidelines.

Metadata should not be managed in source control. They contain mostly data relevant to your workspace.

The only exception is the .launch XML files (launcher definition).

They are found in

That way, those launch parameter files can be also managed into the SCM.

(Warning: Do uncheck the option "Delete configurations when associated resource is deleted" in the Run/Launching/Launch Configuration preference panel: It is common to soft-delete a project in order to import it back again - to force a reinitialization of the eclipse metadata. But this option, if checked, will remove your detailed launch parameters!)

should be in your SCM (especially .project and .classpath according to the Eclipse documentation).

The goal is that anyone can checkout/update his/her SCM workspace and import the Eclipse project into the Eclipse workspace.

For that, you want to use only relative paths in your .classpath, using linked resources.

Note: it is better if project-dir refers to an "external" project directory, not a directory created under the eclipse workspace. That way, the two notions (eclipse workspace vs. SCM workspace) are clearly separated.

(From the blog post Tip: Creating and Sharing Launch Configurations from KD) 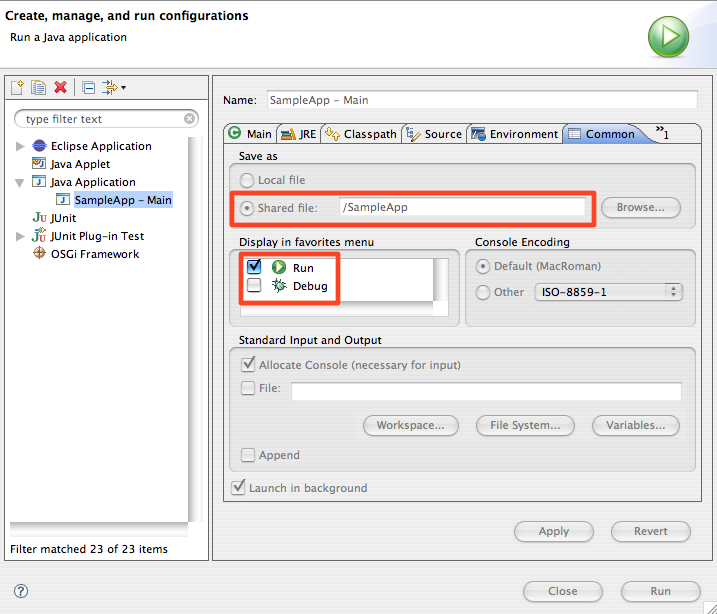 Visual-studio – Should I add the Visual Studio .suo and .user files to source control

These files contain user preference configurations that are in general specific to your machine, so it's better not to put it in SCM. Also, VS will change it almost every time you execute it, so it will always be marked by the SCM as 'changed'. I don't include either, I'm in a project using VS for 2 years and had no problems doing that. The only minor annoyance is that the debug parameters (execution path, deployment target, etc.) are stored in one of those files (don't know which), so if you have a standard for them you won't be able to 'publish' it via SCM for other developers to have the entire development environment 'ready to use'.

Postgresql – How to put a database under git (version control)

Take a database dump, and version control that instead. This way it is a flat text file.

Personally I suggest that you keep both a data dump, and a schema dump. This way using diff it becomes fairly easy to see what changed in the schema from revision to revision.

If you are making big changes, you should have a secondary database that you make the new schema changes to and not touch the old one since as you said you are making a branch.