I'm behind a corporate proxy server that requires authentication. Using Visual Studio 2015, I am not able to sign in, use NuGet, browse Extensions, etc. – all things that would require going through the proxy to access the Internet. This isn't a problem in previous versions of Visual Studio. 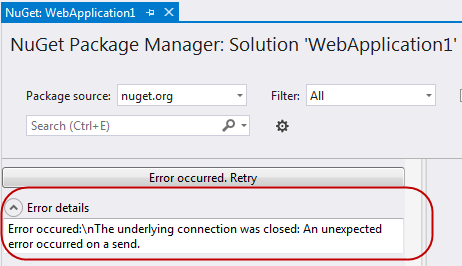 …but to no avail. Anyone else run into this issue?

UPDATE: As Dimitri stated below, NuGet now works correctly. The only thing that still doesn't work is the sign-in screen and the "Featured Videos" feed on the Start page. I've been in contact with our Microsoft account rep, and I'm sending a memory dump to Microsoft for them to troubleshoot further.

UPDATE: NuGet stopped working again. We've determined that the reason that Fiddler makes it work is because Fiddler forces TLS 1.0 connections. The main issue is that our corporate proxy, BlueCoat, is not allowing TLS 1.2 connections, and Visual Studio must not gracefully fallback to TLS 1.1 or 1.0 like IE/Chrome does. Armed with this info, I'm going to our network/security team to attempt to get somewhere.

.Net 4.6 (and Visual Studio 2015) has a different default for System.Net.ServicePointManager.SecurityProtocol than prior versions of the framework. The default now includes TLS 1.2 and TLS 1.1, in addition to TLS 1.0. That's why this was never an issue in earlier versions of Visual Studio.

In our case, the issue came down to our corporate BlueCoat proxy not supporting the TLS 1.2 ECDHE-ECDSA ciphers. The long-term solution is to update BlueCoat to a version that supports this new cipher. But for the short term, we were able to specify the order that Windows attempts to use different cipher suites, so it uses a cipher that BlueCoat understands.

The only change from default is to move TLS_ECDHE_RSA_WITH_AES_CBC_SHA_P256 to the beginning so that higher strength ECDSA ciphers are not negotiated first for TLS 1.2. If you're having a similar problem, you may need to work with your network/security team to determine what ciphers you need to give preference to.

If you want to look at the traffic with Fiddler, you probably want to go the route of changing the machine.config file so that all .NET applications will send traffic through Fiddler. This helps ensure that you capture data from processes running in services, etc.

Open machine.config in the folder C:\Windows\Microsoft.NET\Framework\v4.0.30319\Config. Note that if you are debugging a 64bit service (like ASP.NET) you will want to look in the Framework64 folder instead of the Framework folder. Similarly, if you are using a .NET version prior to 4.0, you will need to adjust the version part of the path.

Add the following XML block as a peer to the existing system.net element, replacing any existing defaultProxy element if present:

Note: You can use Fiddler to inject a User-Agent header on outbound requests if you like. Also, in the latest version of Fiddler, you can File > Import > Packet Capture to collect HTTP traffic out of .cap files captured using Microsoft NetMon or Microsoft Message Analyzer.

C# – How to enable NuGet Package Restore in Visual Studio

It took far too long but I finally found this document on Migrating MSBuild-Integrated solutions to Automatic Package Restore and I was able to resolve the issue using the methods described here.

When editing your files by hand, here's what you'll be looking for: